This new release (13th already!) has been mainly focused on improving the project page and fixing some issues in on-premise deployments.

That is why on the page of each project we have included a new set of visualizations that will allow you to quickly see some data from your analysis without needing to access Kibana. In future releases we will include more visualizations related to community and performance. 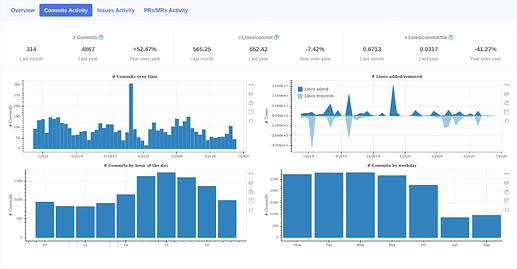 We have expanded the user guide with a new chapter related to how data sources are added to our projects, and we have released a new section: frequently asked questions! Now, those new users who enter the platform can have a starting point when they have a question. We will expand this section each release.

Some time ago we saw that those Cauldron instances with Sortinghat active took a long time to finish the analysis. We discovered a bug related to how tasks were organized to merge identities, and we have fixed it. Now, there are two types of workers: one for the identity tasks and the other for the other tasks. You have more information in the corresponding issue.

We have also included pagination in the tables shown on the administration page, since it took a long time to load when the number of dashboards was huge.

We have also been working on the preparation of a performance report for Cauldron, which will show data such as the number of new users created or the resources consumed by some services.

Again, we continue to work on the new task system for Cauldron, for which we plan to have a prototype ready in the next release.

Finally, something that was needed was a guide for those users who want to contribute to Cauldron. We’ve included it, along with a code of conduct, so if you plan to contribute take a look first.

With nothing more to add, we hope you like this new release and any comment or feedback is welcome. See you in the next release!

Congrats team! I think that a link to the contribuing guide would be very valuable in the release notes.

Some comments about it:

The merge request process is unclear to me:

An interesting resource to check other CONTRIBUTING.md files is: https://github.com/mntnr/awesome-contributing

Thank you very much and kudos for the new release!!

Hey, sorry for the late reply!

Some of these questions have been answered recently in the new README.md and CONTRIBUTING.md files, but i will try to answer them here too.

I would suggest to avoid using email to discuss changes, and use only public issues to ensure discussion transparency

I agree, the preferable methods to suggest changes to the project should be public, but I would keep this other method as an alternative for those who prefer to make a first approach in a private way. In the response we could suggest them to open an issue in public channels.

Which other methods are available to communicate changes?

The current methods are via issue, community.cauldron.io, or email to contact@cauldron.io.

Who are the owners of the project. Being an open source project, isn’t it owned by the community?

By owners we mean the category that GitLab gives to those who has admin privileges in the repositories of the project. We could change this name to maintainers, maybe.

Who is gonna review the merge request?

What does the end of the layer mean?

For layer we mean patch.

Which README.md are you talking about?

Depends on the component that the user is modifying.

What are the examples files ?

I think the name should be changed to template files.

I hope that all your doubts have been resolved (or at least most). If not, please tell us.